Updated May 3rd, 2019. Posted by travelwith2ofus

Korcula - in case you have never heard about it (pronounced kaw-chula) is a small Croatian island located in the Adriatic Sea. It covers an area of 279 sq. kilometres, with a length of around 47 kilometers and a width of roughly eight kilometres.

The island boasts sand-covered beaches on the sloping southern side, while those in the north are covered with pebbles and have a relatively flat gradient. It's one of those hidden gems that everyone will eventually find out about.


The villages of korcula

Korcula Town
You can start sightseeing as soon as you land on the Croatian island of Korcula, in the main city by the same name.

St. Mark's Cathedral should be your first stop, especially if you are a lover of old architecture. Built by locals and Italians between the 14th and 16th century, the large building contains masterpieces dedicated to different saints, and a true sight to behold.

The town museum, housed by the Gabrielis Palace, tells the entire story of Korcula's development to date –cultural and economic. The story of stone-masonry and shipbuilding evolution, both key sectors in Korcula, is well told. In there lies an 1819 piano too, which was played by Edith Streicher, a great friend of Beethoven.

The City Defences are also a sight to behold, especially viewed inbound from the sea. The towers and walls give a sense of security to the little island.

The two Governor's towers – the 1483 large one and the 1443 smaller one - give a great vantage point where you can see all that is going on around the town's waters.

Then, there is the Sea Gate tower, and the remaining parts of the sea walls that clearly demonstrate the desire of the builders to protect the island even in the days of old.

Further up is the Moreska Museum, which houses costumes and some old photos of the Moreska dance, another tradition that you should make a point of witnessing while in town. 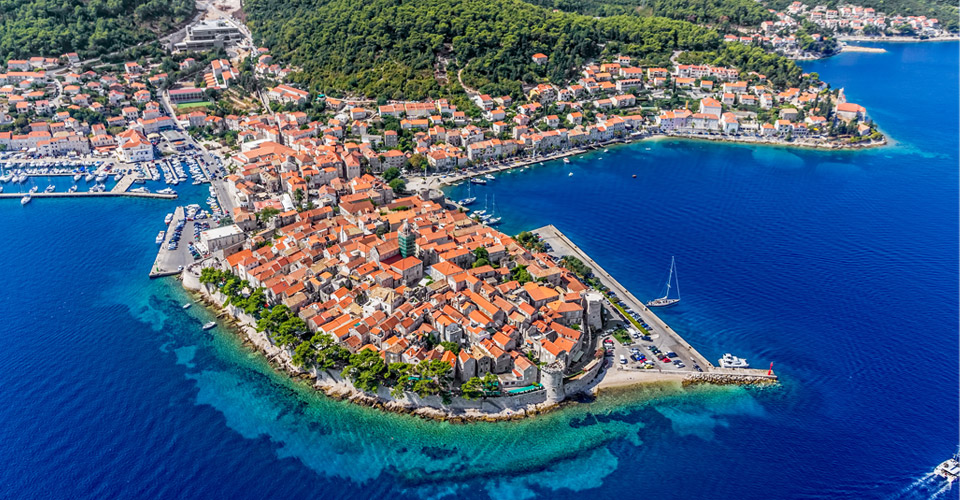 Check Out These Korcula Hotels:

Lumbarda
Where is Lumbarda located in Korcula? Lumbarda is located in the eastern side of Korcula, it is built around a small bay and features a number of small vineyards.

St. Anthony's hill is a sight of both religious significance and natural beauty. It lies almost midway between the towns of Lumbarda and Korcula, so it can fall under either location. It has a 1708 cypress alley bordering the 102 step climb to the top, where a small church lies, built in the 14th century.

From the top you get a beautiful sight of Korcula town. Some of the beaches in Lumbarda include Vela Przina Beach, Bilin Zal Beach, Raznjic Beach and Tatinja Beach.

Smokvica
A highly forested area with fertile soils, Smokvica dedicates much of its activity to grape farming. Here, you can see some of the vineyards that produce the best grapes for the best wines of Korcula. In fact the Posip grape originated in this village. Posip is the first legally protected white wine in Croatia.

The village is dotted with old-style patrician houses, and is also home to the Purification of Our Lady Church, which was built in 1920. While here, be sure to ask where the Kumpanjija folk dance is happening at the moment; it is a traditional folk dance that you will really appreciate.

If you are visiting in July or August, check out the traditional Fishermen's nights which features concerts and exhibitions. 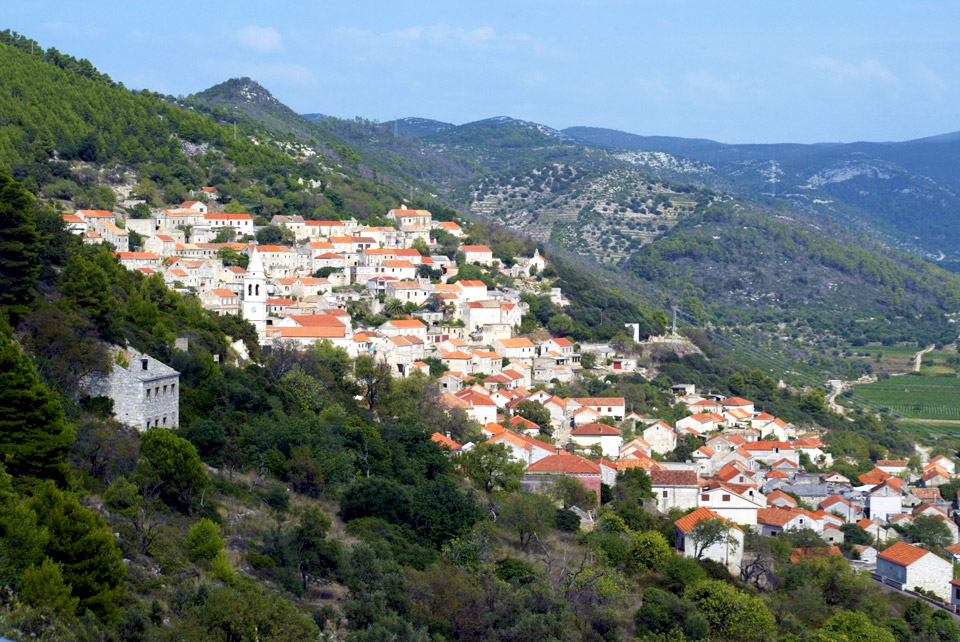 Zrnovo
The village of Zrnovo is famous not just for its pasta, but also for the single sword dance Moštra. The dance is a done by a mock army led by a captain, who leads his troops to form some defence formations that are co-ordinated and flow between each other with astounding beauty. The dance goes with a rhythm produced by a drum and bagpipe. A sight to behold!

Kočje is a forest reserve which features dolomite rocks. The Fairy Spring, also known as Vilin izvor, can be found among the rocks, and the water is noted for its purity and limpidity.

Zrnovo is about 4 km west of Korčula town and has two beautiful coves, Žrnovska Banja and Tri Žala. Here you will find accommodation, holidays homes and beautiful beaches.

If you're visiting Korcula you should definitely check out these interesting tours. 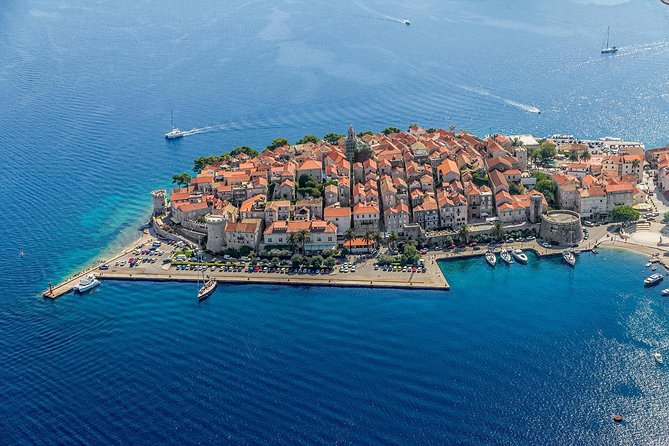 Start your journey to the island of Korcula exploring a small town called Ston, one of the best fortified towns in Europe, town famous for its production of mussels and oysters.

Pleasant journey throw the peninsula Pelješac will surprise you with its vineyards, breathtaking ... 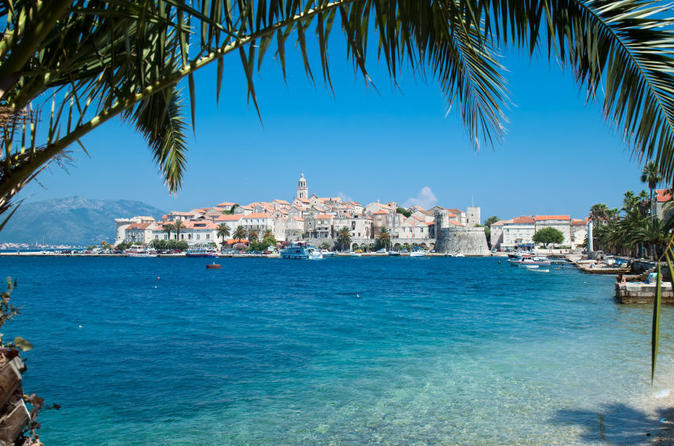 Island of Korcula with Wine Tasting Day Trip from Dubrovnik

Lying on a small peninsula on the island of the same name, surrounded by city walls and fortresses, Korcula is one of the most beautiful medieval cities on the Adriatic Coast.

The town is also the supposed birthplace of Marco Polo, the famous explorer. Tour the charming streets ... 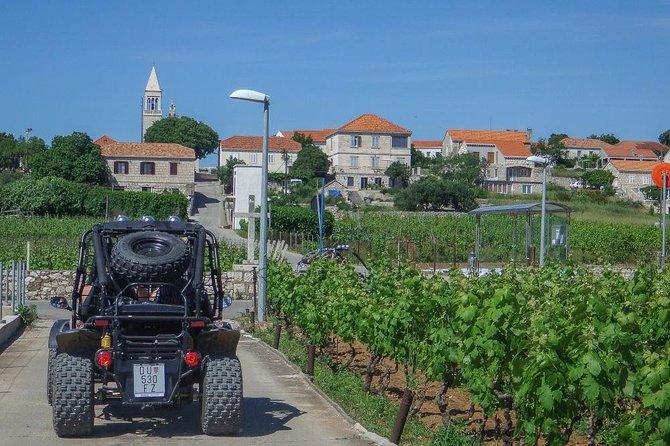 Enjoy a buggy adventure on Korcula island, the ultimate fun excursion for all ages.


Vela Luka
Which is the largest town in Korcula? Vela Luka, the largest town in Korcula is connected to Split via ferry and catamaran lines. It is surrounded by a number of beautiful coves including Mikulina Luka, Tudorovica, Gradina, Triporte, Poplat, Pičena and Stratinčica. Options for accommodation include hotels, apartments, houses and even campsites. Vela Luka is also an important Olive oil producing town and you can enjoy this at some of the restaurants there.

While you are in Vela Luka you can also check out Vela Spila, which is a cave and prehistoric archaeological site located above Pinski Rat. It is here that you can find most information about ongoing archaeological works. You can also find biking and walking trails as well as dive spots around the town.

The history of winemaking on this island that describes itself as a paradise of white wine goes back hundreds of years, and saying that they have perfected the art is but an understatement.

The wines of Korcula are prepared both commercially and domestically, and while a bottle can be shipped to you anywhere, the period of your vacation is the only chance you have to literally drink from the fountain.

What type of wine do you get in Korcula? Pošip, a straw-gold coloured white wine, is one of the most popular wines you should sample. It is a heavy and thick kind of wine that takes its sweet time to leave the glass, lingering just as much in your mouth and leaving a taste you will definitely want to savour. You will definitely understand why this wine enjoys the protection of Croatian law.


The Grk is another wine you will definitely enjoy. Prepared from Grk grapes thriving in the tiny village of Lumbarda, this green-yellow-gold wine has a uniquely bitter tinge to it, seeming to probe the palate in a playful and pleasant manner. It goes down well with most of the seafood served on the island.

Plavac Mali is an outstanding red wine in a sea of white wines. It has a deep red color almost edging to purple, with a strong pleasant aroma to it. The grape that makes it is grown for two purposes - wine making and to help in pollination of the Grk, which does not have a male flower of its own. This one, dark as it is, will be ideal for your red meat meals.

Korcula's wines have a marginally higher level of alcohol, a relatively richer aroma and just the right acidity levels. Try it for yourself while across there. 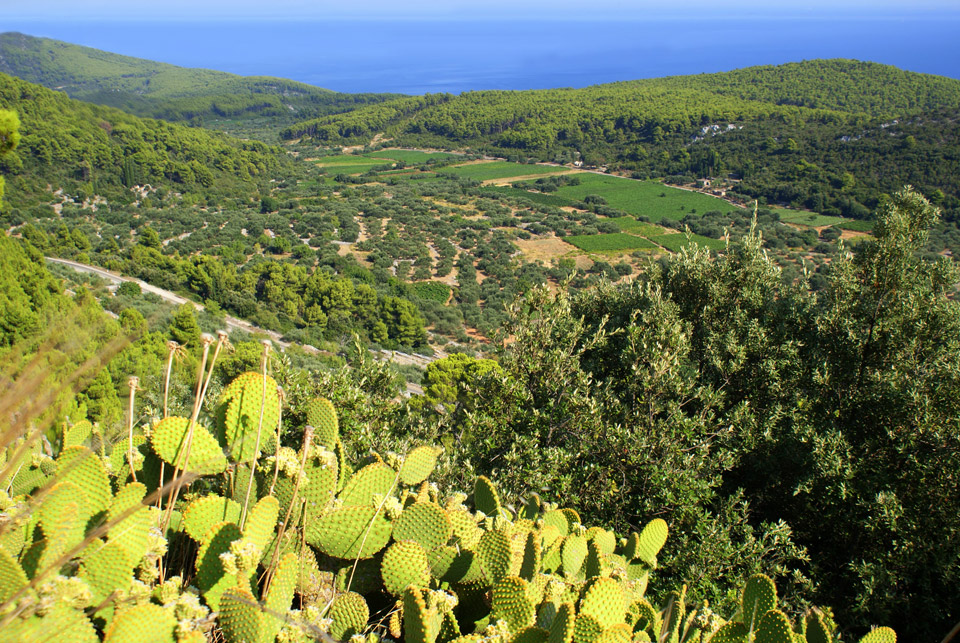 What type of food will you find in Korcula? Korcula is a haven for seafood. Grilled fish is the most popular seafood that you will find. It has a sweetened taste from the addition of some seasoning only unique to the island.

You might need to wait a while for your fish to get prepared, but once its served you will appreciate the time and effort that went into its preparation.

Sea urchins and limpets are delicacies that locals love to enjoy once in a while, mostly on the trips to Skoji. While there you might want to find out what makes this experience so treasured, by trying out the practice of the retrieving the limpet from rocks where it sticks.

Korcula has an excellent method of preparing the meat of goat and sheep. The meat is slowly baked under a traditional lid covered with ember known locally as a peka.

It is cooked to your degree of preference (ranging from rare to fully cooked) then served in large tasty chunks. The meat can also come grilled if you so wish, and goat cheese is also on offer.

Be sure to also sample the pasta on Korcula. It is usually homemade, prepared by hand and to some quite strict ingredient proportions.

The Zrnovski Makaruni, a home-made pasta getting its name partly from its town of origin - Zrnovo - is the most popular pasta that you should definitely try.

It is prepared by careful mixing dough, which is then cut into little pieces and each piece rolled on a wooden stick to make what is referred to as a Makarun. The pasta can be served with any pasta sauce of preference.

Besides the main meals, the unique cakes of Korcula are something you wouldn't want to miss. The paradizet (floating island) and the cukarin, are the two most popular types of cake.

Actually, there is a popular cake shop known as Cukarin in Korcula town, famous for its cake and a definite stop-over for the majority of visitors. Korcula cakes are fresh because of the quick clearance they get once they are out of the bakeries. Other cakes include the lumblije, sirnice, krafne, klasuni and krempite.

Have you ever visited Korcula? Let us know what you thought about the island.

Barcelona for first time visitors with free things to do list

Honestly, I don't think you can go to Spain and not visit Barcelona. It ...

Italy, Greece and the Philippines are just some of the countries that ...

What's in your food tray when you fly. How did it get there?

A couple hours into your journey the flight attendants walk down the ...